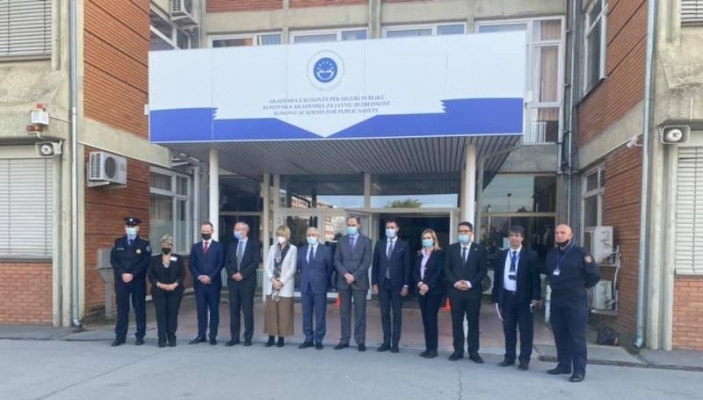 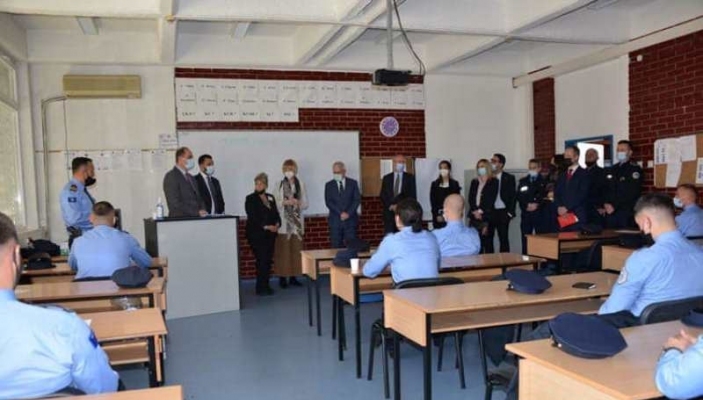 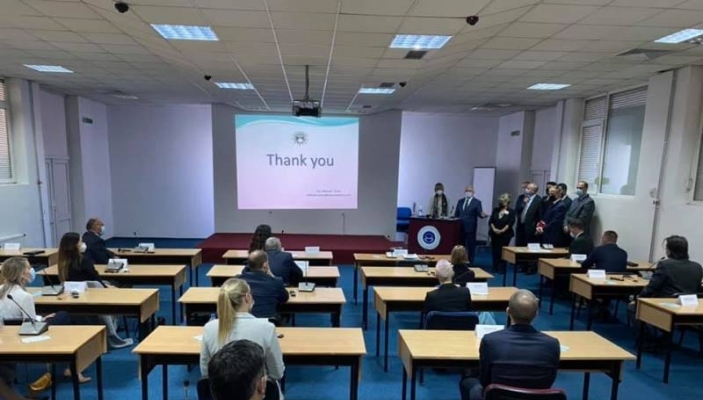 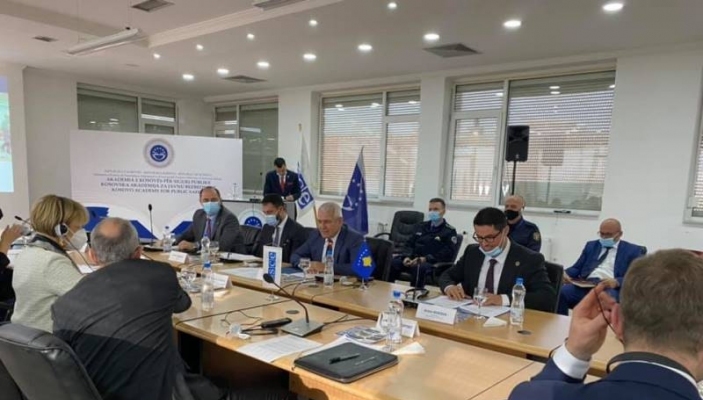 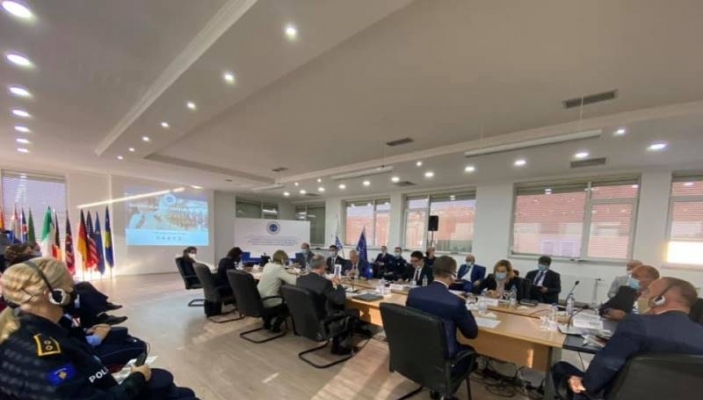 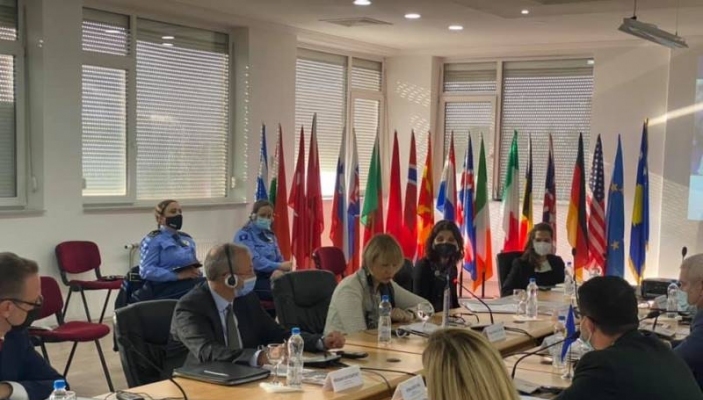 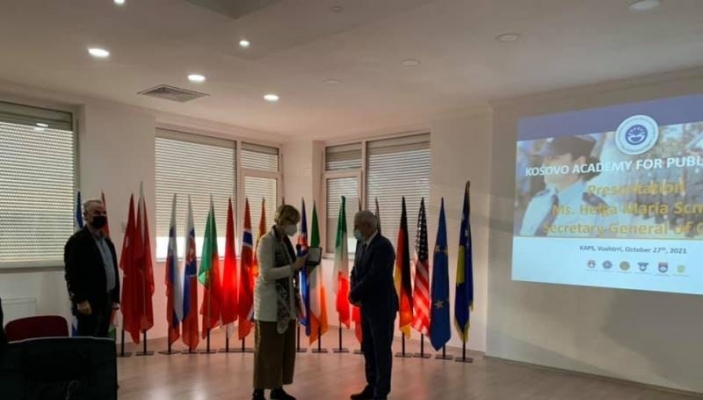 Vushtrri, October 27th, 2021 – The Secretary General of the Organization for Security and Co-operation in Europe (OSCE) Mrs. Helga Maria Schmid, visited the Kosovo Academy for Public Safety (KAPS), where she was hosted by the Minister of Internal Affairs Mr. Xhelal Sveçla and by the Director General of the Academy Mr.Arton Berisha. There were as hosts also the General Director of Kosovo Police Mr. Samedin Mehmeti and the Minister of Local Government Administration Mr. Elbert Krasniqi.

Secretary Schmid was accompanied by the Head of the OSCE Mission in Kosovo Mr. Michael Davenport, and the Deputy Head of Mission Mr. Kilian Wahl.

The purpose of visit of the Secretary Schmid was to get acquainted with the mission, trainings and recent developments at the Academy.

"With all the achievements so far, our vision is for the Kosovo Academy for Public Safety to be further advanced. From an institution responsible for providing training, to be promoted to an educational institution that will offer, prepare specialized and professional staff in the academic research and scientific aspect in the field of public safety ", said Minister Sveçla.

Minister Sveçla said that for the Government of Kosovo and the Ministry of Internal Affairs the priority is and will remain the fight against organized crime and corruption and for this he said that the MIA will provide unreserved support to every member of the Kosovo Police.

Speaking about the work of the Kosovo Police, Minister Sveçla said that thanks to the cooperation, only in the last six months a great achievement has been made in the fight against crime and corruption.

Further during this meeting, Minister Sveçla also spoke about the involvement of minorities in the Kosovo Police.

He said that the goal of the Ministry of Internal Affairs is to increase the involvement of minority communities in the Kosovo Police in the coming years. "It is much more important that with the support of the OSCE we have started a very good initiative related to the preparatory trainings, with information sessions for young people of the non-majority community with special emphasis on the Roma, Ashkali and Egyptian communities, who want to join the Kosovo Police ", said Minister Sveçla.

On this occasion, Minister Sveçla expressed his readiness for further cooperation with the OSCE and public security institutions.

While the Secretary General of the Organization for Security and Co-operation in Europe (OSCE) Helga Maria Schmid, expressed satisfaction with the cooperation that the OSCE has with Kosovo institutions, specifically with public security institutions. "I am pleased with the partnership and good relations that the OSCE has with the Academy, the Ministry of Internal Affairs, the Kosovo Police and other ministries," said Mrs. Schmid, while she is considering that education for public safety officials is much more important.

Secretary Schmid spoke about gender equality in public safety institutions as well as about the inclusion of minority communities in the Kosovo Police.

She highly appreciates the efforts of Kosovo institutions to give space to minorities to be part of the Kosovo Police. Mrs. Schmid said the OSCE will continue to support the development of the public security sector in Kosovo.

During the meeting, the Minister of Local Government Administration Mr. Elbert Krasniqi also said that Kosovo has excellent cooperation with the OSCE in all municipalities of the Republic of Kosovo. Speaking about the cooperation, Minister Krasniqi said that the OSCE has supported the MLGA in drafting the law on local self-government.

Meanwhile, the head of the OSCE mission in Kosovo, Michael Davenport, said that the OSCE is keeping components with non-majority communities so that they are informed on how to join the Kosovo Police. "I reaffirm our commitment to continue and work to advance the capacity and skills of law enforcement agencies," said Mr. Davenport.

Whereas, the General Director of the Kosovo Police Mr. Samedin Mehmeti thanked the OSCE for the support provided to the Kosovo Police, “The journey of establishing the Kosovo Police has not been easy, taking into accounts the time and circumstances in which our country was at that time,  but with the help of our international partners and in particular with the contribution of the OSCE, we managed to build a very credible and professional police institution, the construction of a multi-ethnic, democratic police", said Mr.

Mehmeti, saying that the Kosovo Police is performing its task more successfully.

Also, the Director General of the Kosovo Academy for Public Safety Mr. Arton Berisha thanked the OSCE for the support they are giving to the Academy. "To talk about the contribution of this organization not only for KAPS, but also for law enforcement institutions in particular, and for its general contribution to Kosovo after 1999, it is really both a privilege and a responsibility", Mr. Berisha also said that without the OSCE mission, the  KAPS would not be what it is today.

Director Berisha mentioned all the areas in the construction of which the OSCE has provided support. Mr. Berisha also spoke about the numerous donations given by the OSCE, without which, as he said, the Academy would not be so professional and known by the international community.

The meeting was also attended by other officials from public security agencies.